Once upon a story stone was created as a way to entertain my children! After several years of Preschool background I had had plenty of experience in telling stories, often made up on the spot.  Several years ago now I created story bags which contained props and words, as lovely as these were they were expensive to make and not suitable for very young children.  I realised there was a gap in the market for an affordable way to help children get creative in telling stories.  I started created painted story stones for well known books like ‘The Gruffalo’ and ‘Room on the Broom’ but I could never sell them  despite the interest as was so worried about copyright law.  I decided what was needed were my own illustrations!  That way I owned the copyright. 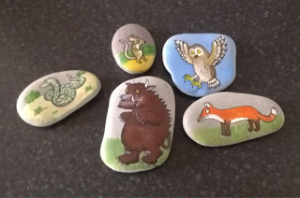 My next task was to create my own illustrations and my first range of story stones were created. These were very labour intensive and each stone had a hand drawn, coloured then carefully cut out image on it.  (on both sides) .  As lovely and tactile as these were I became increasingly aware that it was not easy to get the pebbles with a flat enough surface for my images to sit flatly on.  I also became aware of a law stating it was illegal to remove pebbles from beaches.  I knew this was the case with some beaches but had no idea why or even which.  So, I began to worry about sourcing pebbles and the rise in price as the ones I needed were river bed paddle stones (not easily available in this country)

Well after a couple more years I had the idea of trying little tiles.  These looked fab but were breakable if accidentally dropped on a very hard surface.  No good for small hands if there was a possibility of tile shards hurting them.

So, should I keep trying?  maybe this was a fruitless idea….. then genius struck!

I started to create wooden tiles! I have a very supportive wood yard who could get the tiles the right shape for me and then armed with a mini sander I did the rest!  So although my story stones are no longer stone, they are so beautiful to hold, not too heavy (saves on postage) and also perfect for small hands and not something that could be used as a dangerous projectile! (perfect!)

So now we are all caught up, you are looking at the latest version of my stones and there will soon be some even more exciting products to buy!